You learn so much when you climb to the highest point of your country, stop and look around. You learn of the beauty of simplicity, the power that comes with finding the balance between what you have, what you want and what you need.

We had driven 3 500km across the country, hiked 141km, and climbed 7 888m of vertical ascent. It was a journey that saw us climb through clouds, drink coffee on a stoep in the quiet of the Karoo, feed tame eland, whoop at wild horses, wake up in white wonderlands of frost, lose our hats to gusts of wind and play in the snow. It was a two-week adventure in which we saw the glory, beauty and hardness of South Africa. It was a challenge that taught us about the resilience of our children as we watched them learn and grow.

It began at home, in Pietermaritzburg, as soon as the lockdown was eased and cross-border travel was allowed. We were not going to set the fastest time, or race up the climbs, but experience South Africa during a time that has been testing on all who love adventure and travel. We had one rule – leave as little trace as possible. We also would travel as light as possible. So we decided we would harvest all our water from natural sources, avoiding the cursed single-use plastic bottled water and municipal processed water. Water security is such a huge issue in South Africa. It cannot be talked about enough. We saw that first hand.

Adverse weather, steep mountains, cold nights would be part and parcel of our 9 Peaks Challenge but having stomach issues due to dodgy water was not. We used a JoJo water bottle fitted with their Disruptor filter technology. We sourced water from village wells, stagnant ponds populated by tadpoles, farm dams and streams dirtied by wild horses. We harvested dodgy, skanky water and did not get sick once. No tummies were upset in the making of our adventure. 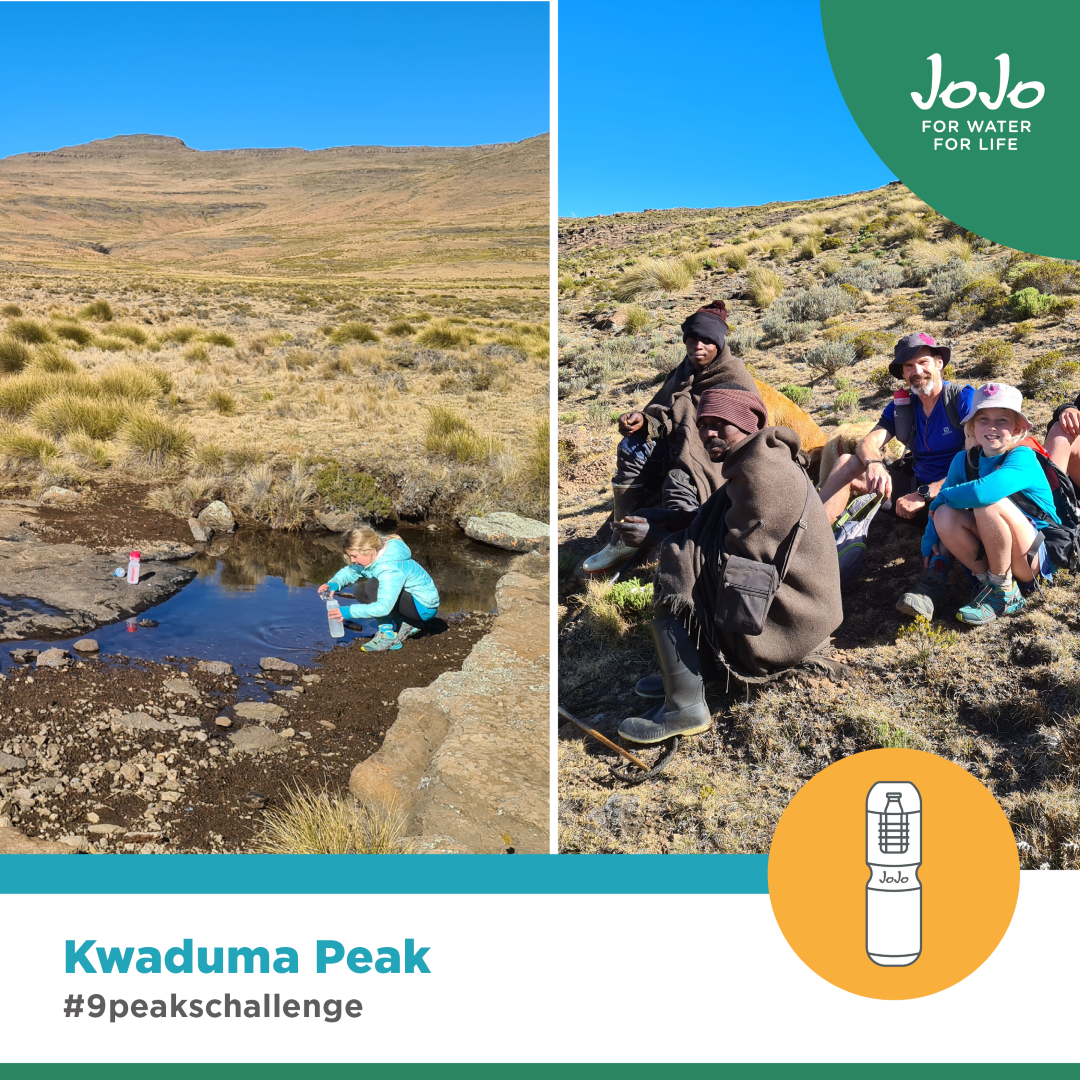 Our first water stop, near Dullstroom in Mpumalanga, was an eye-opener for the kids as we used a local community well to fill our bottles. They could not believe people did not have water in their homes and had to push 25-litre drums in wheelbarrows.

There was little water as we headed up De Berg to tickle its back, the first peak of our challenge, a 9km round trip to stretch the legs. We conquered the Iron Crown in Limpopo the next day. The roughness of the road and the slow slog in the car through the Wolkberg region to the start of the 2.5km hike was worth it by some of the most phenomenal scenery. The terrain was thorny, barren and dry on the lower slopes, but amazingly green once up high in the mountains, with magical views given a soundtrack by thunder and dark rain clouds passing in the distance as we summitted.

Our next two peaks came and went in a heated rush on the fourth day. Nooitgedatch (North West) and Towerkop (Gauteng), were quick, painless and not particularly memorable. That would change on day five as we woke up in the Free State and our first 3000m peak, Namahadi (3291m) in the Drakensberg, awaited. A 6km hike took us above the clouds to the infamous Mont-Aux-Sources chain ladders. We had planned to harvest water from the source of the Tugela Falls, and envisioned a crystal clear stream but instead the stream was just dried-up ponds loaded with hundreds of tadpoles in murky water. Our disruptor JoJo filter was a life saver, as we seamlessly harvested the skanky water! 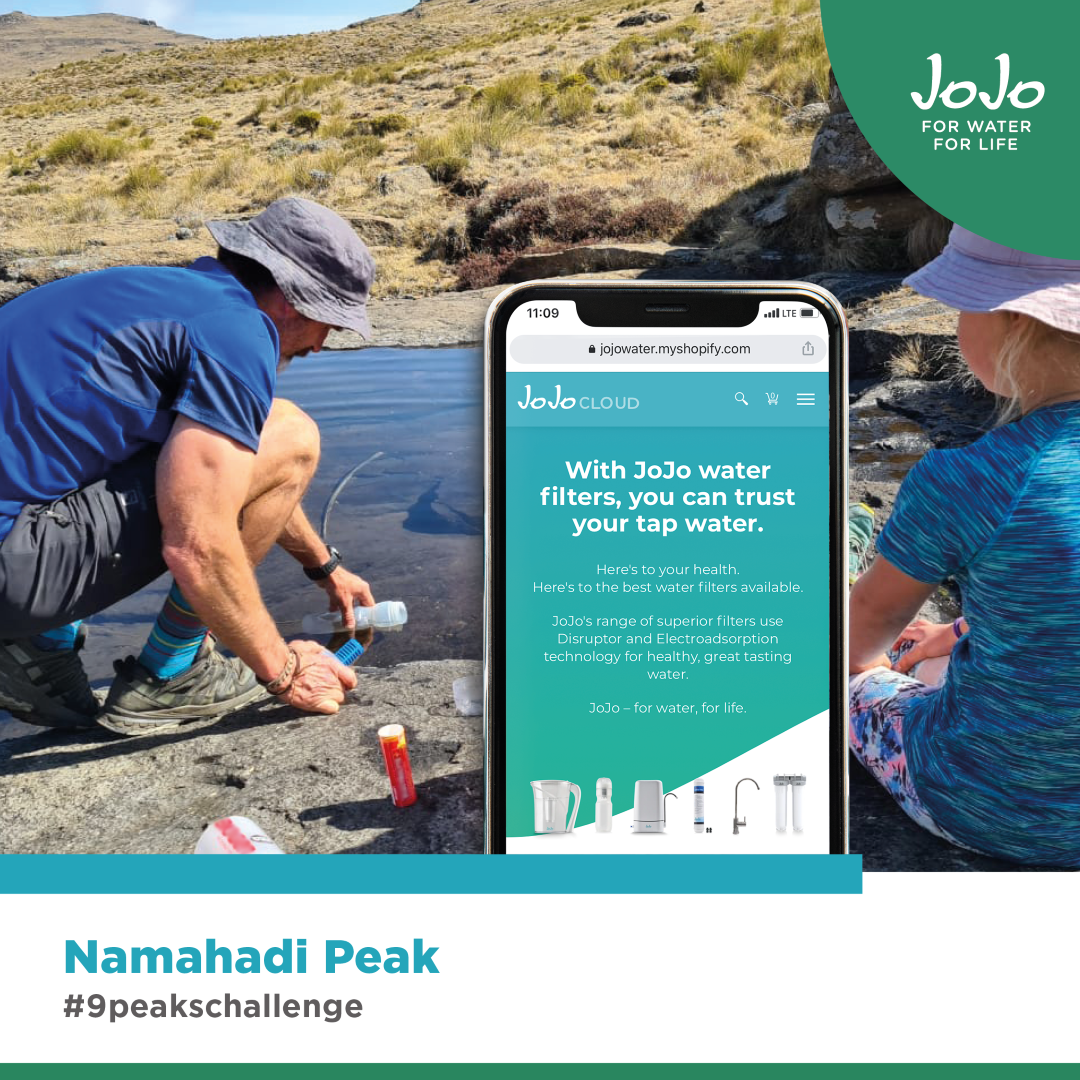 A change of plan was needed for our next scheduled peak, Mafadi, as the forecast was dire with 90km/h winds. Perhaps it was fated to be so, to save the biggest challenge until last. So we headed to the Western Cape and the Seweweekspoort Peak near Ladismith. The weather was closing in, a cold front was approaching, so we started climbing early to avoid it. It was tough and technical, 4.5km straight up, over boulders scattered across the upper reaches of this gnarly mountain and wind gusts beyond gale force on the summit that whipped off our hats in a 30-second gust from hell. Voted our toughest peak to date.

From the trig beacon, we could see the Indian Ocean, 30km away, an unexpected surprise, but not as wonderful a surprise as finding a patch of snow on the way down. It was Ruby’s first ‘snow’ experience and time stood still as our adorable rug rats played.

The monster of Kwaduma in the Eastern Cape was next.

At 3019m, the Kwaduma peak is reached by a 32km trek that feels like you have walked up a mountain and discovered another country. The top of the escarpment is a wonder of rolling, grassy hills, where large herds of wild horses fill your soul with the wonder of nature.

We bagged the peak and camped a short distance from the summit, waking up in a minus 10 degrees freezer. The forecast for Mafadi was no better, wild and freezing with snow, sleet and rain.

We stalled our final ascent for a few days, and when the weather cleared, we began the last, glorious 36km stretch of our adventure. 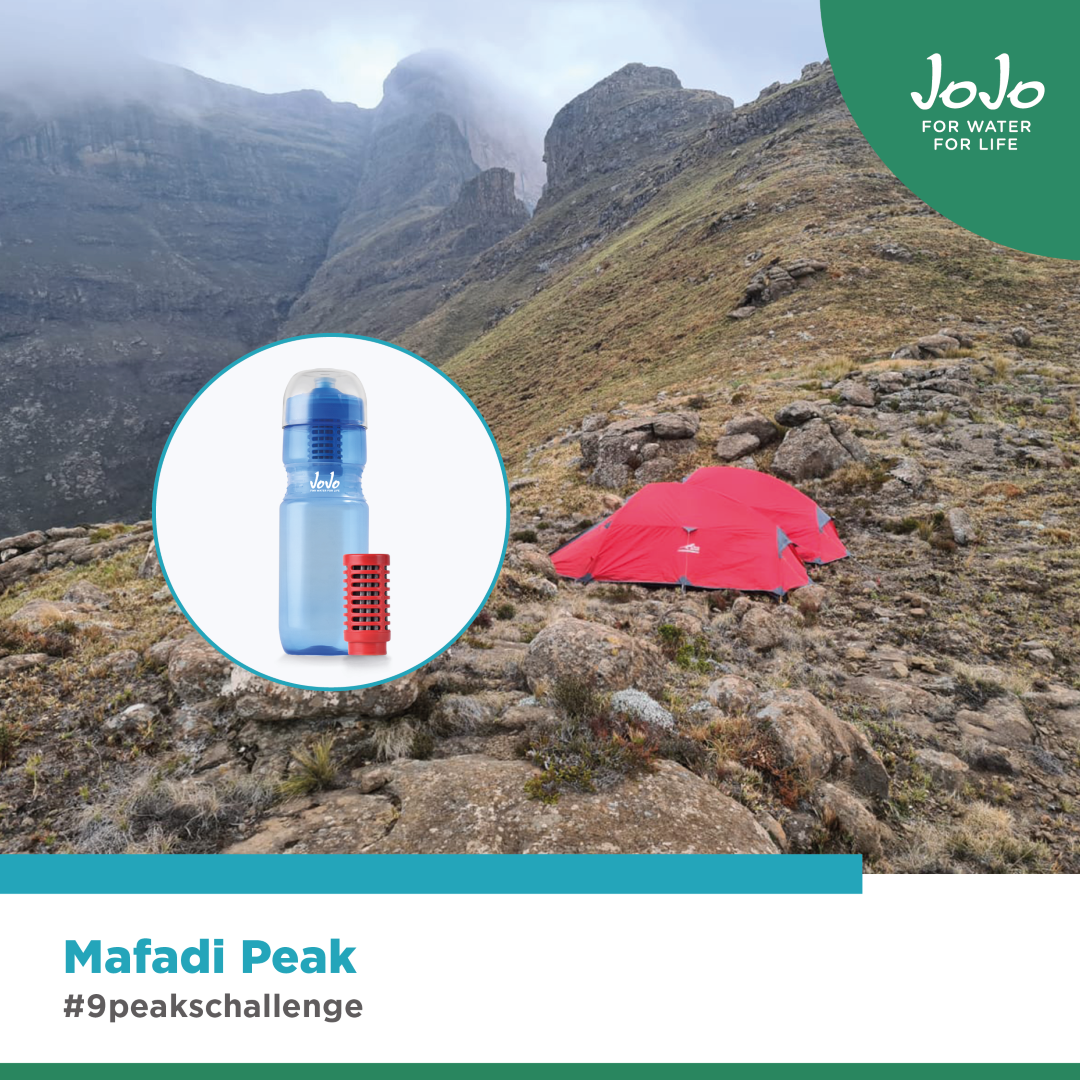 The grandness of Mafadi envelops you once you pass the Centenary Hut, with in-your-face massive views on either side of the track as you climb the narrowing “dragon’s back”. We camped on an exposed ridge at 2700m. The weather had been undecided all day, starting with sunshine but settled in with ominous, dark black clouds and wind on the ridges.

It’s in the stillness of a mountain that we hear our hearts and our souls. Being detached, alone but together, knowing life had suddenly become so beautifully simple with our only needs being shelter, food and water, brought a freedom you cannot buy.

Ruby and Callum clambered up the very steep, boulder-strewn Corner Pass with smiles and joy that shone the next day. At the top, at the highest point in South Africa, we clung to each other, emotions warming us, joining us, making us one. Standing on the peak of Mafadi in that moment in time, I would not have wanted to be with anyone else in the World. I was with my family and that was all that I needed.

Towards a more sustainable future: Switching to a circular economy.

Water-wise gardening with JoJo: How to have a beautiful garden while saving water.

How can we help you?

Find the answers to your most Frequently Asked Questions.

From filters to tanks, JoJo offers a wide range of solutions to suite various applications including domestic, agricultural, industrial and commercial.

Having trouble finding the ideal solution for you? Have a look at what we have available and don’t hesitate to ask for assistance should you need any guidance.